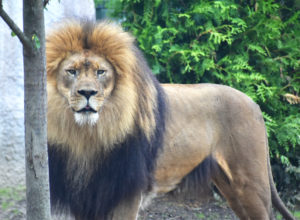 The Akron Zoo will open its new animal area on Saturday, June 29. The Landon & Cynthia Knight Pride of Africa will feature a new habitat for our African lions and white storks and introduce new species Speke’s gazelle and crested guineafowl. The area will also include a new feeding area for goats, an expanded train ride and a spray pad.

The African lion habitat will feature a pair and trio of lions. The zoo’s male lion, Tamarr, and lioness, Mandisa, will continue to be a bonded pair. The zoo recently welcomed a new male lion, Donovan, from the Columbus Zoo & Aquarium and two lionesses, Kataba and Msinga, from the Philadelphia Zoo. The two sisters will be introduced to Donovan.

A multi-species habitat will include two Speke’s gazelle, four white storks and two crested guineafowl. A traditional Maasai livestock enclosure, called a boma, will be home to seven Boer goats.

With the new, expanded train ride, guests will have the opportunity to ride through Pride of Africa, catching glimpses of lions, gazelles and storks. A new, interactive area will give visitors a chance to learn more about the clean water crisis in Africa, as well as an opportunity to cool down under misters.

As an accredited facility through Association of Zoos and Aquariums (AZA), the Akron Zoo participates in many Species Survival Plan (SSP). An SSP is a scientifically-managed breeding program that works to ensure a genetically-diverse population of endangered species in zoos and aquariums. The Akron Zoo has a breeding recommendation for Speke’s gazelles and white storks.

The Akron Zoo supports Rebuilding the Pride, a conservation organization in Kenya dedicated to reducing the human/lion conflict in the Southern Rift of Africa and protecting lion habitat.