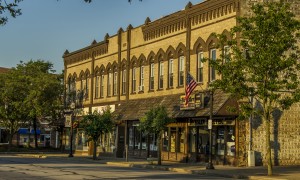 Over 30 business leaders, city council members and land owners in Downtown Wadsworth attended a meeting at the Public Library Thursday morning to learn what it would take for the city to be classified as a “Main Street” community.

The seven staff members from Heritage Ohio who came to the city today to tour the Downtown area were impressed. Not by the buildings, but by the people.

“The best thing we have seen is the passion and the turnout. To see so many people come out that are really concerned with Downtown Wadsworth is a really good sign” said Jeff Siegler, the Director of Revitalization for Heritage Ohio. “That bodes really well during the application process”.

Besides the staff members from Heritage Ohio, representatives from nearby Main Street cities, Medina, Kent and Wooster also attended the meeting.
“This is the time. There has never been a better time”, said Sandra Hall, the executive director of Main Street Wooster.
Hall told the Wadsworth leaders in the room that “It’s hard work, but it’s worth it in the end”.

If Wadsworth is given the “Main Street” designation, there are plenty of challenges ahead.

That entails public-private partnerships. That entails business, community and civic groups working together. It also entails cooperation from the local, county and state levels of government.

Some of the ideas that came up for discussion, consistent signage, building renovations, a “Wadsworth branding”, more liquor permits being made available to attract more restaurants to Downtown Wadsworth and newer scheduled events. That’s just for starters.

When will Wadsworth know if it’s been designated as a Main Street Community? “The group will meet, have a preliminary discussion and hopefully have a decision made by the end of the week”, said Siegler.

The Main Street designation for Wadsworth would allow for grants and training to be made available for committee members and access being given to the templates used by over 2,800 communities in the United States on what they did to improve their downtown areas.