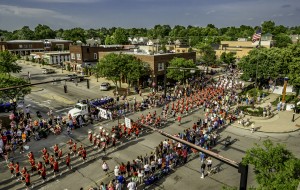 It wasn’t the news we were hoping to see in our inbox today.

“We will be cancelling the 2020 Blue Tip Parade,” Tom Morris, Blue Tip Parade chair, wrote in an email on May 2. He thanked all those involved with the parade for their patience as they navigate the unprecedented challenges presented by the pandemic.

“For 47 years, the parade has been the ‘opening ceremony’ to the Blue Tip Festival and many of you have been a part of the parade for as long as I have.  I take the stewardship of the parade very serious because it is so much more than just a bunch of people walking down the road.  It’s a celebration of Wadsworth.  It is part of Wadsworth,” Morris explained.

He continued, “While the parade is important, the health of the spectators, participants, volunteers, and police are more important.”

Morris cited the lesson learned from the story of the Liberty Loan Parade of 1918. The City of Philadelphia held a parade in September that year to celebrate the return of our troops from their fighting in the First World War. “Earlier in the spring, the Spanish Flu had found its way to the United States from Europe with our returning soldiers.  In part because of the low number of cases in Philadelphia, the Liberty Loan Parade went forward as scheduled.  Within a week of the parade, there were over six hundred new cases of the deadly virus.  Within six months, 16,000 Philadephians died of the flu.”

It was that lesson that caused the Blue Tip Parade to be canceled. Those who have paid a registration fee have three options:
1. Leave it with the Blue Tip Parade as a donation to defer costs they already accrued in preparation for the now-canceled event to date.
2. Use it as the application fee for next year.
3. Ask for a refund.
“As of this moment, the festival is still trying to move forward in some capacity,” he explained.Wadsworth Community Radio will continue to bring you the latest updates as soon as they’re available.
Share 0
Tweet 0
Share 0
Share
Share