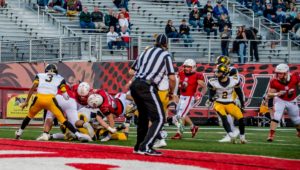 The Wadsworth Grizzlies scored on two long runs in the second quarter as they defeated Cuyahoga Falls 42-0 at Art Wright Stadium.

Dom Loparo scored on an 80-yard run in the second quarter to give te Grizzlies a 21-0 lead at halftime.

In the third period, Loparo scored on a three-yard run, quarterback Trey Shaffer hooked up with Carson Risher on a 27 yard strike and Robbie Lynn returned an intercepted pass for the final touchdown in the fourth quarter.